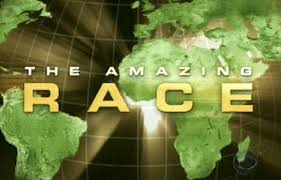 I watch a lot of television.  I’m single, childless, and have my own not-too-creepy apartment with no roommate whose feelings I need to consider or whose death I have to plot.  So if I’m not flipping between History Channel, MSNBC, and whatever movie channel Comcast has conned me into paying for this month, I’m tearing through my DVD collection to do marathons of Arrested Development, Buffy, Deadwood, It’s Always Sunny In Philadelphia, The Office, The Simpsons, etc.  This weekend I plan to watch Community Season 1 until my eyeballs dehydrate either from lack of sleep or me drooling over Alison Brie in a succession of short skirts.  Since I already have enough shows to keep me occupied, I am extremely wary of taking on any news ones.  Plus, I have all the patience of a two-year-old  whose juice box was replaced with a can of Code Red Mountain Dew so for me to start watching a new series, I have to be hooked from the very first viewing.

I did not start watching The Amazing Race until the summer of 2003.  By then the show was already a critical darling and had a small but fervent following.  None of that mattered to me, as I had just finished doing commentary for the sixth season of Survivor and the last thing I wanted to do was watch another reality show.  I think I also felt an aversion towards a show that took Survivor’s Thursday 8 p.m. timeslot for the summer, like it was some sort of stinky squatter playing off-key Phish tunes on a cheap guitar in the drawing room while the mansion’s owners are at Newport.  But there I was that July night, flipping channels and finding nothing else on, so I decided what the hell, I’d give this Race thingee a shot.  If it sucked, I could always…oh god, what do people do when they’re not watching television?  I really, really, REALLY hoped it wouldn’t suck.

That summer was The Amazing Race’s fourth season.  Hardcore fans who have watched since the beginning tend not to like this edition, if only because it wasn’t as all-get-out-awesome as the first three stellar seasons.  But I hadn’t seen those earlier races so the fourth season was my first taste, and I by the quarter-hour commercial I was hooked.  It took me less than ten minutes to decide Jon and Al (“Best Friends/Clowns”) were my favorite team, as they were not only fast but never failed to bust out the red noses and juggling whenever opportunity presented itself.  This was the season of air traffic controllers, models, football wives, asthmatics, and a gay couple, Reichen and Chip, who finished in the top three in nine of the thirteen legs, and ended up edging past engaged but bickering Kelly and Jon for the win.  I loved every minute, even if the clowns only finished in fourth.  I also liked the host, genial and unflappable Phil Keoghan.  He was cool autumn to Jeff Probst’s torrid summer.  No, I have no idea what I mean by that, either, but maybe it’ll make sense later.  Anyway, I’ve watched every race since, and caught the first three seasons when they were syndicated on GSN.  For my money, the best races were indeed those initial three, but I also really like Season 12.  That was the race that gave us dating goths, grandsons and grandfathers, and old school Chinese-American dad Ronald never missing an opportunity to belittle his daughter Christina, and speaking my favorite line ever:  “I’m optimistic with the real truth flavor.”  Worst season?  It’s a tie between Season 8 (the dreaded Family Edition) and Season 9, which featured the two most unlikeable teams in the show’s history (cloying hippies BJ and Tyler, frat tools Eric and Jeremy) making it all the way to the end.  While Survivor has always been a ratings juggernaut, The Amazing Race continues to pull solid if unspectacular numbers.  Nevertheless, it has snagged Emmy after Emmy for best reality series, and gets more applications than any other show.  If Survivor is a Rolls-Royce, The Amazing Race is a Bentley; not quite as well known, but sportier with lots of racing trophies.

As of this writing, we’re two episodes into Season 17.  I generally don’t care much for early episodes because there’s too many new faces to keep track of, and all the blonde women – seven this season – look identical when running through airports or falling out of boats.  Brook, Mallory, Katie, Stephanie, Rachel…it’s one pale yellow blur.  Here are the teams this season:

Ron and Tony (“Best Friends”); no sense of direction or balance doomed them on Leg 1.

Nick and Vicki (“Dating”); stupid but inoffensive.  Vicki’s got more ink on her than the Sunday Times color supplement.  Don’t expect to see them much longer.

Nat and Kat (“Doctors”); hot and smart, without the squealy “girl power” nonsense or pathetic flirting other female teams indulge in.  My favorites so far.

Michael and Kevin (“Father/Son”); the anti-Ron and Christina.  Old Taiwanese-born Michael is sweetly enthusiastic and kind of goofy, but Kevin is being as patient as he can.  Still, I think they both know Michael probably won’t be able to finish.

Jill and Thomas, Chad and Stephanie (“Dating”); same teams with different names.  I think Stephanie is the one with shorter hair but, honestly, I don’t care.

Gary and Mallory (“Father/Daughter”); not as unbearable as I imagined.  Gary is pretty mellow, but bug-eyed Mallory always looks ready to laugh, cry and have a nervous breakdown all at the same time.

Connor and Jonathan (“Ivy League A Capella Singers”); aka guys who never got laid in college.  This season’s designated “nerds” but truth be told, they’re pretty funny and yes, they do sing well.  My second favorites.

Brook and Claire (“Home Shopping Hosts”); the team I’m most conflicted about.  They’re hyper and girly and doubtlessly have stuffed unicorns on their beds.  And did Brook really have to force a kiss on the poor tractor driver who told them which way was north?  On the other hand, Claire had the single best moment of reality TV this season when she tried to launch a watermelon with a giant medieval slingshot and somehow managed to shoot it back into her own face.  An average watermelon weighs three pounds, so that was almost 50 ounces of hard, speeding fruit smashing into her head at about 300 feet per second.  It was as awesome as it sounds, and I dare the hosts of Jackass to come up with anything better.  Anyway, Claire confessed her face felt numb from the impact, but she went right on ahead and completed the roadblock.  So I gotta give props.

Andie and Jenna (“Birth Mom/Daughter”); another team I was conflicted over.  Yeah, it’s real sweet Jenna wanted to reconnect with her birth mother, and it was lucky Andie was open to the idea.  But is a nationally viewed reality show the best place to do it?   They got eliminated before we could get a definitive answer.

I liked the 90 minute premeire episode with its Ye Olde England locale and knights of yore challenges, but the second ep in Ghana was, well, pretty damn depressing.  Much as I usually enjoy this show, I cannot stand when the racers (most whom are white and affluent) are sent into poverty-stricken Third World cities and the roadblock calls for them to sell goods to the locales, in this case cheap sunglasses.  It just feels sad and exploitive (Kat really looked like she hated every second) and, in this episode, it went on way too long.  Plus the pacing felt off, as the pit stop appeared rather early.  However, things dramatically picked up in the last quarter where the remaining teams had to get through heavy traffic, and a couple of the more daring cab drivers sped against on-coming cars to overtake the slow backup.  Seriously, it was like a Bourne movie!  And the show won back my love, like it always has since that summer night in 2003.

Next time on TV Chile, we’ll check back in with Survivor and what could be its worst season yet.  Eat up!