You are here: Home / Opinions / Brand Relations and Blogging; Has That Glowing Article Been Enticed?

These days almost everyone follows some sort of blog. It could be fitness, technology, parenting,  fashion, the list can go on and there is a blog for just about any niche you can think of. However you might not be aware that many bloggers out there are not disclosing when they received payment or a free item to write a favorable article. At this point some of you might think “no big deal.” But it is a big deal.  Here’s why.

In 2009 the Federal Trade and Commission (FTC) put out guidelines that advertisers, magazines and bloggers need to follow.  These are in the FEDERAL TRADE COMMISSION 16 CFR Part 255, Guides Concerning the Use of Endorsements and Testimonials in Advertising.

Then in early 2013 the FTC, probably because of the lack of bloggers and brands disclosing their relationships, further tightened their guidelines and even made easy to understand PDF booklet called .com Disclosures, How to Make Effective Disclosures in Digital Advertising which is an excellent read. 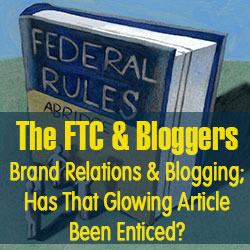 Years later, anyone who takes blogging seriously has read, heard, and probably sat in seminars on how to be FTC compliant.  This is not news for any blogger wanting perks for having a blog unless they are living under a rock.  However as you read on you will discover there is a segment, and in my opinion a big segment, of bloggers who are pretending not to know any better.

If you want to entertain yourself, google “Knott’s Berry Farm Blog” and search for mothers blogging about their families and kids going to Knott’s.  If they mention words like Giveaway or Free tickets, they were probably hired to promote Knott’s. Now search between the dates of September 2009 to February 2014. very few will have disclosures which the FTC expects.

Now in March 2014, kudos are due to GigaSavvy because it looks like some of the many bloggers posting about Knott’s Berry Farm have used a cut and paste disclosure  with their most recent Knott’s posts. The disclosure I saw on a few blogs reads “The opinions in this article are my own. I do not work for, or with, any brand mentioned in this article, nor do I have any official relationship with them.  I have a relationship with GigaSavvy, for whom I create original editorial content.”

At this point you would think that all bloggers would comply, especially when many of the bloggers are all about being a great parents and being a role model of ethics to their children and obey laws and regulations. However just search for “Knotts Berry Farms”, “blog” and “giveaway” and narrow the search to items written in March 2014. To my amazement the first time I searched in Google the first page of results did not return one mom blogger who had any disclosure.

When I searched further I discovered a few who had a disclosure, however they were at the bottom of the post, whereas the FTC states that they need to be at the top. As far back as 2009 the FTC were publicly recommending that disclosures not be buried at the bottom of a post or on a separate page. If anything a blogger should include a brief disclosure at the top and, if necessary, provide additional details at the bottom.

Further they are failing at disclosing in their Tweets, Instagram Photos & Videos

The FTC also states that every social media post about the item or event that was given for free or were paid to write about has to be disclosed. This means every Tweet, Instagram Photo, Facebook Post, Pinterest Post and any other social media post should clearly state it is by using something for example the hashtag #Ad and the FTC states it must be before the URL, not after.

This is where the public should be concerned. Bloggers who blog about Knott’s and received payment in the form of free tickets is just one example.  Those same bloggers probably have several relationships with other brands, and often if they do not disclose for one they are not disclosing for others.

Some companies are making an effort to ensure that bloggers they work with disclose according to the FTC such as giving them cut and paste disclosures to use. However there are many marketing / PR / SEO companies who are seeking out bloggers who do not disclose, knowing that the general public will think the review  or article was not compensated by free items and or cash, therefore being enticed more to purchase if a blogger took their personal time to write a favorable article and did not get compensated with free items or cash.

You and I might take our hard earned dollars and buy a product because we were duped into believing that the product must be good because that blogger wrote about it. But we were not aware of the relationship behind the review that blogger was enticed to write about the product for cash or free items. Yes some bloggers put little cute quotes saying “received free product or monetizing but my opinions are my own.”  I am glad they are being FTC compliant, however would that blogger even write about it if there was no free product/ticket  or cash involved? Many would not. So those articles or reviews you might read before purchasing might not be as honest as you think. But when there is disclosure the reader is made aware of the relationship before making an informed decision.

Some of the blog posts that I noticed lacking disclosures have been paid for by tickets, products and cash are but not limited to are promoting or reviewing for companies such as Disney, Orkin, Netflix, Zerorez Carpet Cleaning, and Walgreens.

Yes I can hear you saying “we all know the internet isn’t honest,” but the FTC and others are trying to make an honest web as much as possible so informed decisions can be made. The irony that kills me is mom bloggers who do not disclose, these same mothers pride themselves of being good role models, excellent parents, obey the laws but yet they are misrepresenting themselves online to make a buck or get a free item. This is what good parents teach their kids not to do, while compromising themselves ethically by not disclosing. We all want to spend our money wisely and want to seek out honesty if that is a review or article about products or places.

Even if a brand, marketing or SEO company hired to work with the bloggers does not state that the blogger must disclose, a blogger in my mind should be morally and legally responsible and be a role model and follow the FTC disclosure guidelines any time there is money or items exchanged. They should not just be a role model for other bloggers, but also to their children, their friends and society.

Help Young Women, Our Daughters and Granddaughters, Realize Their Potential!
What Were We Thinking the Days Before We Put Wheels On Suitcases
BART to Strike Again on Aug 4, Addresses Safety & Funding