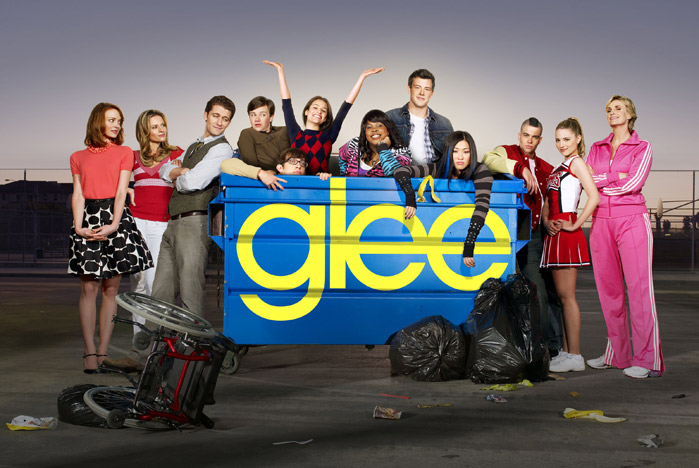 Last week, I reviewed the brilliant but criminally underwatched Community.  Turns out that show films its exteriors at Los Angeles City College, where a much more popular campus-set series also happens to shoot.  Last season, Community took this memorable shot at its rival:

Heartbroken after being dumped, Jeff cries on Pierce’s shoulder.

Jeff:  We always used to watch the shows she wanted to watch.  I hate Glee.

Pierce:  I’m not crazy about Glee either.

Jeff:  (crying harder)  I hate it!  I don’t understand the appeal at all!

I understand the appeal just fine.  It’s pretty ‘n perky all-American high school students singing easily digestable comfort food songs, i.e. “Total Eclipse of the Heart,”  “Lean On Me,” “Endless Love,” and just about every piece of crap ever recorded by Journey.  Like Community, Glee is about a group of misfits learning weekly life lessons at a school in middle-America.  Unlike Community, it’s pretty mediocre.

Ryan Murphy created Glee in early 2009.  I don’t exactly know his creative process, but I think it’s fair to guess he saw how many gazillions those High School Musical DVD’s were pulling in, and exclaimed in a shrill yodel with much splaying of bejewelled fingers, “I wants me some of that!”  Okay, maybe that’s not how it happened.  I’ve seen his photo and he doesn’t wear that much jewelry.  What’s important is that Murphy previously created the shows Popular and Nip/Tuck, two series that tried to be dramas without being very dramatic and also tried to be comedies without being very comedic.  Murphy likes to think he’s a fearless trailblazer because he shoehorns hot button topics in his shows, usually revolving around gender issues and homosexuality.  And these issues usually resolve themselves with two hot girls making out, so I guess I shouldn’t complain.  But Murphy can’t write jokes – irony slips from his grasp like a greased eel – and he doesn’t have the patience or ability to construct hard hitting drama.  His stock characters never reveal much more than who they are on first meeting.  Those two douchebags on Nip/Tuck never learned a damn thing, ‘cause Murphy kept getting bored and larded on new gimmicks instead of constructing a believable season arc.  With Glee, we have a cast where every ethnicity, gender, orientation, and physical or mental impairment is represented…and not one person feels authentic.  The teacher is earnest , the jock is dumb as a blind chimp, the cheerleader is hot and stuck up, the black girl is overweight and sassy, the wheelchair guy is…there.

Perhaps the least served is the excellent Jane Lynch.  She’s a national treasure, appearing in such awesome comedies as Best In Show, The 40-Year-Old Virgin and Talladega Nights.  Hell, I even laugh when she shills for Healthy Choice meals, and those things taste like microwaved cat vomit.  Anyway, her character, “Sue Sylvester,” the art-hating gym teacher on Glee, does get the best lines.  I admit getting a chuckle out of her local news commentary on how we should remember the real meaning of Halloween; “Fear.”  Problem is, there’s nothing more to the character.  Once you know she’s a right-wing curmudgeon, you know everything about her.  Hate to keep bringing up Community (wait, no I don’t)  but that show’s equivelent, Chevy Chase’s “Pierce Hawthorne,” is much funnier and more interesting because just when it seems he can’t be any more wrong or hateful, he then says or does something truly wonderful that reminds you why the study group puts up with him.  It’s the difference between a cliché and a real person.

At least Lynch has a recognizeable character.  Either the show’s protagonist, glee club instructor “Will Schuester,” is supposed to be an unsympathetic tool using the hopes and dreams of impressionable kids to secure his own selfish goals, or actor Matthew Morrison is just a smirking block of wood.  Oh, hold on, it’s both!  Broadway vet Lea Michele is apparently the glee club’s ringer, as she’s the only person I heard actually singing instead of belting.  But I still couldn’t tell you anything about her character other than she has a wide smile and stands about two feet shorter than the lug playing her boyfriend.  The rest of the glee club are blandly photogenic, sort of like the cast of Twilight posing for a Sears catalog.  When they all got into their Rocky Horror drag, I couldn’t tell or honestly care who was who.  To be fair, the musical numbers – the show’s bread and butter – are shot and edited with sweep and energy.  No one’s gonna mistake it for Rob Marshall or anything, but they’re the only parts of the show which have any snap.

Full disclosure:  I am not a Rocky Horror fan.  Minus a theater full of costumed lunatics throwing candy and yelling at the characters, watching the film itself is a dismal experience.  Nothing is more desperate than intentional camp, and 35 years later the movie’s so-called boundary pushing is now revealed as cheap shock and window dressing.  Give me Cabaret any day, and let’s not do the timewarp again.

Thanks to Linda Howerton-Pritchett for suggesting I watch and review Glee.  She is forgiven.

Survivor : Nicaragua
Archer is not only the funniest animated series on air but perhaps the funniest series period!
Mad Men - Rock'n Roll