The Sitcom Bible decrees, in large gothic letters, that a disparate group of people, usually coworkers or family, argue and insult each other for twenty minutes until finally coming together at the end of the episode to show they still care about one another and reassure the audience everything is okay again in the Land of Laughter.

It’s Always Sunny In Philadelphia doesn’t do that.   In fact, for half a decade now it’s done exactly the opposite.  A typical episode begins with the owners of Paddy’s Pub having a meeting of the minds about a given issue, be it gun control, abortion, the disabled, home makeovers, gay marriage, etc., and then rapidly disintegrating into warring factions until they’ve been psychically crushed, harshly disillusioned, and thoroughly defeated.  The fact that The Gang never comes together is what drives the comedy, and why I consider It’s Always Sunny to be the great anti-sitcom.

Conceived by Rob McElhenney as a low budget vehicle for him and his friends, fellow writer-actors Glenn Howerton and Charlie Day, the show was originally going to follow the travails of small time thespians in L.A.  The F/X network thought the home shot pilot (a shorter version of the ep that eventually became “Charlie Has Cancer”) was funny enough, but they made two critical notes:  1) A broad audience would not connect with Hollywood based actors, and 2) the show needed a female part to offset the three guys.  Thus the show was reimagined as being about three young tavern owners in McElhenney’s native Philly:  “Mac” (McElhenney), whose grasp of the religion he professes to believe is about as loose has his grasp of the martial arts he thinks he’s learned from too many late night movies;  “Dennis” (Howerton), the vain and boorish “brains” of the group, with a penchant for lame 80’s music and solving any problem by popping his shirt (“Let the pecs do the talking.”); and “Charlie” (Day), the illiterate and unstable emotional grenade who nevertheless has hidden talents for music, taking a punch and sewing.  To address the female character, Kaitlin Olson of the Groundlings was added as “Deandra” aka “Sweet Dee” aka “Dee,” the twin sister of Dennis, a failed actress who started out as the voice of reason but soon – at Olson’s urging – revealed herself to be every bit as selfish, bigoted and psychotic as the guys.

The Sitcom Bible further decrees your characters must be likeable, but The Gang at Paddy’s Pub are the worst people in the world.  In Season 1’s second (and best) episode, “Charlie Wants an Abortion,” Mac jumps whole heartedly into the anti-abortion movement, first for vague religious reasons, but then to impress a hot girl who works for the cause.  After an afternoon quickie in her car, she tells him she’s pregnant.  Mac’s immediate reply:  “You gotta get an abortion.”  Meanwhile, Dennis decides to join the pro-choice side because they seem to have even hotter women, until his unsubtle come-ons earn him one rejection after another.  At which point, he jumps ship to the anti-abortionists.  Meanwhile, Charlie makes an effort to bond with the boy he supposedly fathered with a loose girl in high school.  Only the kid is an awful, racist brat, so Charlie finally resorts to getting the child drunk.  It’s a beaut of an episode, expertly setting up its payoffs, and demonstrating the show’s disdain for traditional sitcom paradigms of loveable characters and happy outcomes. 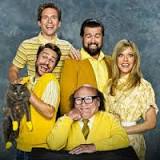 After a hilarious but little watched first season comprising just seven episodes, F/X renewed the series on condition that Danny DeVito add a little star power as “Frank,” wealthy but avaricious father of Dennis and Dee.  Revelling in their misanthropic lifestyle, he quickly makes himself a partner at the pub and a roommate of Charlie’s.  If the first season pushed the boundaries of good taste, the second season kicked ‘em right over the cliff.  The dynamic of these five horrible people ruining their own lives and those of everyone they came in contact with made for such gaspingly funny eps as “Charlie Gets Crippled” (the gang tries to benefit from faking disabilities), “Mac Bangs Dennis’ Mom” (in which said banging leads to a chain of revenge bangings) and, most memorably, “The Gang Exploits a Miracle (Dee attempts to seduce a priest so he’ll bless a stain in the pub’s bathroom).

Fans of the show generally agree that second season’s ten eps were the show at its fearless best, and I would put the third season right up there as well, particularly “Dennis and Dee’s Mom is Dead,” “Sweet Dee’s Dating a Retarded Person,” and the epic two-parter, “The Gang Gets Whacked.”  Since then, It’s Always Sunny has brought more writers aboard and while the show is often still funny, it’s become more hit or miss.  I wasn’t really loving this current season, it’s sixth, until last week’s superb “Who Got Dee Pregnant?,” written by McElhenney and Day, showed this series can still deliver huge laughs like little else on TV.  Slyly incorporating Kaitlin Olson’s real life pregnancy into the show (she and McElhenney are married in real life), Dee tells the guys one of them impregnated her at Paddy’s Halloween party.  Of course, they were so drunk they can’t remember that night, and so we get several Rashomon style flashbacks as Charlie, Mac an Dennis relive the eventful night as they each recall it before “browning out” (Dennis’s term).  Olson is a very attractive blonde yet a running gag is the guys always ridiculing Dee’s looks, likening her to a giant bird.  So the episode’s crowning gag is when Mac recalls the party, Dee is portrayed by a live ostrich.  It’s a joke five years in the making and I ruptured my spleen, I was laughing so hard.  Seriously, I need someone to take me to the doctor ‘cause I don’t like the look of what I’ve been coughing up.

Next time on, we check in again on the rolling trainwreck that is Survivor: Nicaragua.  Eat up!

Conan O'Brien
My Take On Hawaii Five-O
Top Gear USA - What We Think of the American Version!