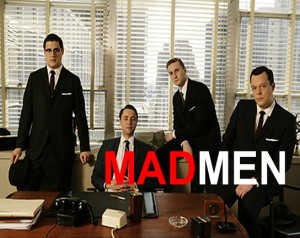 “I was born in a trunk

Mama died and my daddy got drunk

Left me here to die alone

In the middle of Tobacco Road

All I had was hangin’ on my back

Only you know how I loathe

Gonna leave, get a job

With the help and grace from above

Save some money, get rich and old

Bring it back to Tobacco Road”

We haven’t heard much rock ‘n roll on the previous seasons of Mad Men.  Most of the characters are too old or move in circles where it wouldn’t be played.  True, we’ve heard the occasional Chubby Checker or obscure soul record but the Sterling-Cooper gang have primarily lived in a world whose soundtrack is pop, jazz and acoustic folk.  That all changes in 1964 Matt Weiner tells us with “Tobacco Road,” one of the more primal British Invasion records which would have just been ending its six week run in the Top 40 at the end of November, when Mad Men’s fourth season begins.  EVERYTHING changes this year.

First, there’s no more Sterling-Cooper.  It’s now SCDP (Sterling Cooper Draper Price) with a sleek new office that’s a tad cozier than their old digs and doesn’t have a conference table.  Instead they have a circle of chairs which supposed to stimulate conversation and ideas.  We see how well that goes with the Jantzen swimsuit meeting.  I like how Peggy and her new assistant (I didn’t catch his name) do Stan Freberg’s famous “John & Marsha” run.  It’s so out of nowhere and it feels like real office rapport, much like how we quote The Simpsons or Modern Family nowadays.  Speaking of funny, Roger as usual gets the best line of the night after learning Ad Age sent a one-legged man to interview Don:  “They’re so cheap they can’t even afford a whole reporter.”

Second, there’s no more Don and Betty Draper.  Our protagonist now lives in a Greenwich Village apartment, not all that different from the one his first season mistress Midge occupied.  (Wonder if they’ll bump into each other at the Waverly Theater.)  Betty is now Betty Francis, married to Henry, although they still reside in the same house she shared with Don.  He’s graciously let her stay rent free even though she and her new husband were supposed to be moved out by October.

Third is, well, everything else, as both Don’s date and Henry’s mother tell us.  The whole country is changing, and not everyone likes it.  Don’s date, a young gal we can assume is a liberal, mentions the slain civil rights workers in Mississippi.  Henry’s mother, a Republican dowager, doesn’t approve of the disillusion of families and remarriage, even her son’s.  And violence is not only becoming more prevalent; it’s even desirable.  None other than sweet Peggy Olsen comes up with the idea for two actresses to fight over a client’s ham in order to score cheap publicity, a ploy Don fervently disapproves of when he learns of it.  Yet Mr. Holier Than Thou just paid a prostitute to slap him during some sad, sweaty intercourse.  And let’s not forget mother of the year Betty putting some off-camera hurt on Sally after the little girl spits up her yams at the Francis family Thanksgiving.  Sally’s no fan of change either.  (Dig Bobby winning back the table by declaring, “I like sweet potatoes.”   Nothing phases that kid.)

By the way, I like that we’re meeting Henry’s family.  This is what happens when someone remarries.  “I like to think we have twice as much to be thankful for,” he says, but he clearly has his work cut out.  Sally’s not digging new dad, and Betty’s being churlish about staying in the old house without looking for a new one.  A lesser show would make us hate Henry, but damn if the guy’s not pretty cool.  He surprises Betty with some hot afternoon car sex, stands by his wife when Don chews her out for not vacating the house, and is upfront enough to tell her Don is right (but only after the ex has left).  As usual, the episode title, “Public Relations,” has multiple meanings.

One thing remains the same and that’s Don’s reticence to discuss his past.  This dooms a profile Ad Age is running, and leads to SCDP losing Jai-lai.  (And right when longhaired Harry sold it to ABC!)  In the wake of Betty learning his real identity, Don is downright fierce with everyone – Bert, Roger, Pete, Peggy, even the clients – when the subject of what to reveal and what to keep covered is raised by the family-minded Jantzen reps.  Don creates a campaign that plays upon the value of secrets (not showing the top of the swimsuit) but the Jantzen folks see it as too titillating.  (I can’t be sure, but I believe the photo Don is using for the presentation comes from Sports Illustrated’s first swimsuit issue, which came out in ’64.)   This is why Don takes their rejection way more personal than expected, ordering them out of the building.  But he’s still professional enough to do damage control with an interview in the Wall Street Journal, where he gives a not-entirely-accurate account of how SDCP began.  And that’s where “Tobacco Road,” a song Don could’ve written, smashes onto the soundtrack.