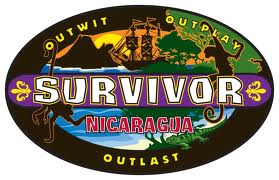 Watching Survivor: Nicaragua is like watching your favorite band go on tour again…and they suck.  After enduring five episodes, I have concluded this is the worst season ever.  Even previous lowpoints like Survivor: Africa, Survivor: Fiji and Survivor: Gabon had standout players like Lex, Yau-Man, and Sugar.  This current cast, however, is devoid of anyone close to sympathetic, strategic or capable.  And remember, I’m the guy who liked Russell.  Just imagine what that angry little man could do to this bunch.  Hell, deluded dragon slayer Coach could school these morons, and still have plenty of time left over for fake tai-chi and misquoting MLK or Gandalf.

With the exception of Tyrone, every person voted off has talked themself out of the game.  And NaOnka, arguably the worst human being ever permitted on the show or this planet (more below), followed in the sad footsteps of Wendy, Shannon, Jimmy Johnson and Jimmy T., and basically told the tribe to vote her off.  It would’ve happened too, had Dan and Holly not switched sides to vote with the younger players and dump taskmaster Tyrone.

Dan and Holly…lord, save us.  I’ve watered things with more mobility and intelligence than Dan.  The man moves slower than a washed up corpse at low tide.  Plus, who wears alligator loafers in the Nicaraguan jungle?  Who wears alligator loafers anywhere?  Unless you’re under subpoena, there’s no excuse.  I must admit, I did enjoy watching Holly sink those offensive things.  But that’s only ‘cause I assumed Holly was going home that week and we were witnessing one last dingbat outburst before her ejection.  How was I to know freakin’ Jimmy Johnson would talk her into staying, and talk himself off instead?  Holly has that authentic smack ‘o crazy that is only seen in correctional facilities, psychiatric wards, and Glenn Beck rallies.  No wonder she bonded so quickly with that other Zoloft case, the truly loathsome NaOnka.

As you know, I’ve championed a fair number of villains in the past beginning with Richard Hatch in the first season and continuing all the way up to the aforementioned Russell Hantz.  Despite offending some viewers and/or their fellow castaways, these guys had some strategic sense.  I’ve no clue what NaOnka’s game is besides venting a life’s worth of bad decisions on a dumb guy and an amputee.  “I’m ‘hood, not ghetto,” she told us after stealing socks from poor dim Fabio.  Exactly which ‘hood would that be where physically abusing a legless woman is considered perfectly acceptable?  ‘Cause that moment where she knocked Kelly B. to the ground to snatch an idol clue was the single most revolting thing I’ve ever seen on television, and that includes Desperate Housewives in hi-def.  NaOnka cannot win.  I know she still has the Immunity Idol, but you know what?  She can have ten idols, an alliance with half her tribe, and Jesus owing her money.  She’ll still lose, because she’s a horrible person and no one’s gonna give her a million dollars.  Plus rain makes her cry.  And all those alliance partners of her’s who didn’t raise any objections when she slapped down Kelly B.?  Benry, Brenda, Chase, Kelly S., Sash…  All dead to me.  I’d defend Kelly B. more if she stood up for herself once in a while, but she’s wilted like a stepped-on daisy instead of the tri-athlete she was before the show.  If NaOnka had treated me like that, I’d calmy look her in the eye and tell her I’m a human being, I deserve as much respect as anyone on that island, and our survival as a team depends on us all getting along as a family.  Then I’d wait ‘til she fell asleep, hold a wet rag over her face until she stopped thrashing, and toss her body into the surf for the tide to take out.  But that’s just me.

An argument could be made that Marty is playing a strategic game.  Then again, an argument could be made that a race of super intelligent woodchucks live in the Arctic Circle.  An insane argument, yes, but an argument nonetheless.  Fact is, Marty only thinks he’s playing strategically.  Getting rid of the two Jimmy’s instead of batsh*t Holly and walking dead Dan was not strategy; it was ego gratification.  Marty won over Dan by telling him to think how great it would be to go back to NYC and brag to his pals that he took down the great Jimmy Johnson.  And Dan bought that argument ‘cause he’s dense as a stale cheesewheel.  A strategic player would’ve kept the high-profile NFL coach and the loudmouth fisherman to deflect attention from himself.  That’s why Russell, the master of the universe, kept Mick around.  Remember Mick?  Of course not, he was worthless, but he was a handsome doctor who everyone (including Mick himself) assumed was the leader of his tribe, when it was really Russell pulling the strings.  After the tribal switchup in last night’s ep (a sure sign the producers knew this season was DOA even while filming), Marty told his new tribe he had the idol because he rationalized Jane would’ve done so anyway.  A strategic player, instead, would’ve convinced Jane into sticking with her fellow older players instead of letting her go over to the kids.  Marty, just because you’re well-spoken doesn’t necessarily mean you’re the smartest.  It just means you’re the most eloquent idiot.  I suppose I could give props to Jill for riding the Marty ego train while laying low herself – she’s the one castaway I’m positive will make the merge – but like Kelly B., she’s too passive for her own good.

Brenda is becoming 3% less hot each episode.  Don’t ask how I calculated that; she just is.  While she still has a rockin’ bod, her face gets progressively more jack o’ lantern-like every week.

So to sum up:  A season of dumb, loathsome castaways, no strategies, and the only real hotty has a head that’s slowly starting to resemble a carved pumpkin.

Next time on TV Chile, Community.  Eat up!

Archer is not only the funniest animated series on air but perhaps the funniest series period!
My Take On Hawaii Five-O
It’s Always Sunny In Philadelphia