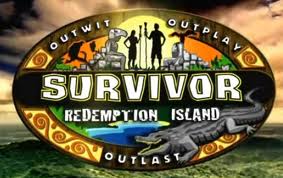 A month ago, I asked for reader suggestions, and the answer was deafening:  MORE SURVIVOR WRITE-UPS.  Well, never let it be said this prom queen don’t put out.

Of course, I can see why you all want more comments.  This show truly has turned around, and just in time after the dream-crushing ordeal that was Survivor: Nicaragua.  Just think, a few short months ago we were having to endure Fabio and Sash and some winged creature that escaped from hell called NaOnka.  So this season couldn’t help but be an improvement.

But let’s not get too carried away.  After all, this has yet to prove itself a classic season.  For that, you need a clearly defined villain, and we lost that with Russell’s swift departure.  You also need rival strategists outhinking and outplaying each other at every turn, but other than some half-hearted attempts by tribal goats Phil and Stephanie, that hasn’t really been the case either.  Basically, you have your Zapatera Six led by…Mike?  Steve?  Ralph?  Guess it doesn’t matter at this stage in the game.  And on Ometepe, it’s the Boston Rob show, as it always is when he’s brought back for a season.

Is Rob playing a great game, or is he just lucky to have landed on the tribe that has the most starstruck castaways?  I’d say it’s the former – Rob is the rare repeat player who learns from his past seasons – but there’s no denying he’s benefitted from the fawning of Ashley, Grant and Natalie.  As long as they stay loyal, he has little to fear from discontent Andrea and Very Special Agent Phil.  In fact, Rob’s acolytes may as well just hand him the million dollars now because they clearly have no strategy beyond following his every order.  Season highlight:  Rob deciding they need a day at the beach, so he can search for the Immunity Idol in private.  And of course they don’t question it.  Then again, if the fourth time’s the charm and Rob finally does win the season, it’s not like he hasn’t been earning it.  I say more power to him.

But you don’t wanna hear me praise Rob.  You wanna hear me light into Very Special Agent Phil.  Well, jeez, where to start?  The pink speedo, with his junk hanging out?  The constant bouts of non-linear verbal diarrhea?  The use of a six-foor spear to hunt crabs the size of a quarter?  To quote Community’s Jeff Winger, “We know he exhibits nay. Flaunts proudly. Obvious symptoms of over a half a dozen disorders you wouldn’t wish on your worst enemy’s pets.”  (You really should be watching that show, btw.)  Yes, Phil is Philarious.  But damn if I don’t want him to stay ‘til the end.  I find his babbling rants fascinating, especially when he borders on making sense.  His overture to fellow outcast Andrea is good game playing, and there’s some smart strategy in planning ahead in the event her alliance partner Matt returns from Redemption Island.  Three is the magic number in this game, and should they get together Rob may have a problem.

Over on Zapatera, there hasn’t been much drama since they threw a challenge to ax Russell.  I don’t care what anyone says, including Probst in his precious little blog.  That was a smart move.  Yeah, I normally hate when teams intentionally lose, but this was a special circumstance.  Russell was a morale drain of the first order.  Worse, he learned absolutely nothing from his two previous seasons and looked especially sad and foolish looking for that idol Ralph, the hirsute hillbilly savant, found earlier without benefit of clues.   After losing to Matt at Redemption Island, he went out crying like a little bitch troll, AND I LOVED IT.  I wanted to lick the tears from his grizzled cheeks.  I bet they tasted like salty champagne.  His departure left henchwomen Krista and Stephanie on the outs with the rest of the tribe, and while I wasn’t sorry to see the former get voted out (did we ever hear her speak until this most recent episode?), I’ve been hoping Stephanie might bust out a few moves to capitalize on the tensions bubbling just below the surface of the Zapatera Six.  For one, it would wake things up on the show, and two, it would keep Stephanie around longer and she’s growing on me.  Her blatant offer to Rob and Grant to switch tribes post-merge was a sound idea, but her passivity at camp after her team lost the Immunity Challenge was baffling.  That’s when she should’ve been hustling her sweet, pert ass off.  Sidenote:  love her skort.  (Yes, I had to look up what that delightful outfit is called.)  Another sidenote:  this season has featured some excellent eye candy, including pouty Andrea and just-this-side-of-jailbait hot Natalie, who was only 18 when the season was shot.  Yes, 18.  But the Survivor oggle-cam insists that I drink in her every contour whenever she bathes or suns herself, and so I do as ordered.  Thank you, Mark Burnett.

Now let’s get to the big change up for this season, a little thing called Redemption Island.  After five eps, we finally see how this works and I have to say the jury is still out.  Ideally, it’s kind of cool that a voted out castaway is given a shot at fighting their way back into the game, wrecking vengeance on those who wronged them, and possibly even winning.  But the promos made it look like the voted out survivors would be engaged in physically punishing Parris Island-style duels.  Instead, Redemption Arena may as well be called Puzzle Palace, ‘cause that’s all the challenges have been; races as to who can assemble something the quickest.  Not exactly the Thunderdome death matches we were hyped.  Plus, Russell aside, there’s no one so far whose possible return really seems to be a game changer.  Alright, Matt may make some trouble for Rob but that’s only if Andrea and Phil are still there if/when he returns.  And does anyone believe a Krista komeback is honestly gonna cause any of her old tribemates to quake in their water-logged sneakers?  I want to see Redemption Island become more brutal and scary.  I want the castaways to absolutely dread the prospect of going there.  And I want the two witnesses chosen from each tribe to return with haunted, glazed looks, like soldiers who have seen things those of us back home would never even imagine.  In short, I want HORROR.

And more shots of Stephanie’s skort.

Next time on TV Chile, the deep fried deliciousness of downhome crimefighting otherwise known as Justified.  Eat up!