You are here: Home / Entertainment / TV / The Walking Dead – Zombies – Who Doesn’t Love’em?

Zombies.  Who doesn’t love ‘em?  They’re slow, recognizably human, but just disfigured enough to negate any sympathy.  Best of all, they’re relatively easy to kill.  You just have to destroy their weak hive mind brains, so anything from a baseball bat to a bullet through the noggin usually does the trick.  But you can’t kill just one.  Once you get started, you want to kill LOTS of zombies.  They’re the Lay’s potato chips of horror.

Every zombie movie has pretty much the same premise; a small group of survivors holds out as long as they can while being steadily besieged by more and more of the shambling former humans.  It’s also the premise of AMC’s The Walking Dead, which concludes its first season this Sunday.  Rick Grimes (Andrew Lincoln), a sheriff’s deputy on the outskirts of Atlanta, wakes up after a gunshot wound puts him in a coma.  The hospital is deserted except for piles of bodies and buzzing flies (a brilliant recurring detail).  Returning to his house, Rick encounters Morgan (Lennie James) and his young son Duane (Adrian Kali Turner) who, after determining he is not infected, fill him in on what’s happened: an outbreak of an unknown virus has turned most of the world’s population into, well, walking dead (the word “zombie” is never used), who pose no great threat individually but are devastating when they mass to feed on the living.  Determined to find his wife and son, Rick dons his sheriff’s uniform, loads up a duffel bag full of weapons including a magnificent Colt Python .357 revolver, and sets off for Atlanta where other survivors are rumored to gather.  The rest of the season sees Rick reuniting with his wife Lori (Sarah Wayne Callies), his son Carl (Chandler Riggs), his best friend and fellow deputy Shane (Jon Bernthal) and a host of other survivors clustered around a collection of vehicles in the woods.  Most of the eps are set in this encampment or forays into Atlanta, which of course is overrun with hordes of the undead staggering through the otherwise silent streets.

This may not sound a whole lot different than any other zombie epic from Night of the Living Dead to 28 Days Later.  Once again, the undead can be a metaphor for any number of things, from the complacency of modern society to the characters’ own pasts catching up with them.  And like in all the movies, we have to ask whether the real monsters are the zombies who can’t help what they are, or the survivors who wantonly massacre their former fellow humans at every opportunity.

But where The Walking Dead stands apart is how it takes advantage of longform television storytelling to show us the emotional cost of a zombie outbreak.  Yeah, I know how that reads, but I’m serious.  No other dramatic series this fall has given me the wallops this one has, such as the first episode’s juxtaposition of Rick mercy killing a zombie without legs while Morgan sights a rifle scope on the head of his undead wife and can’t pull the trigger.  Last Sunday’s ep had one of the more likeable survivors, a quiet widower named Jim (Andrew Rothenberg), get bit during a zombie attack, and realize he’ll soon become one himself.  As the group caravans to Atlanta in hopes of reaching the Center for Disease Control, Jim knows he’s not gonna make it and will become a danger to the others.  Asceding to his request, the survivors place him against a tree and say their individual goodbyes.

The movies never have time for this sort of thing, and it’s what makes The Walking Dead more than just a gory fright fest.

Not that it doesn’t provide the gore or the frights.  Every episode has warnings that the audience should expect some pretty gruesome sights, and man, they are not kidding.  Zombie skulls are routinely split, crushed, shot, crossbowed and pickaxed with accompanying showers of blood, brains and bone.  The second ep saw Rick and his fellow survivors having to elude zombies by hiding their human scent.  The only way to do this was to kill a zombie, chop the fellow open and cover themselves in his entrails.  (Rick, however, did take a moment to read the man’s name off his driver’s license, a reminder that the zombies were humans at one time.)  And the fourth episode’s climactic onslaught of the camp was pure bloody terror, with a number of survivors who we came to know and like or loathe becoming so much zombie chow.  Good as this show is, it is not for the faint of heart or stomach. 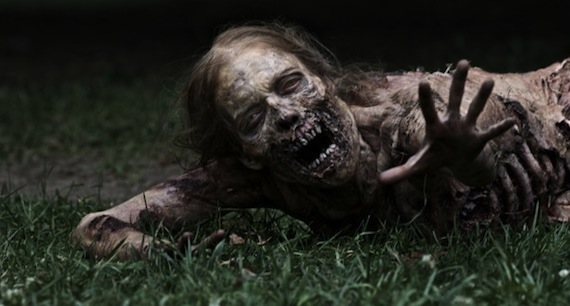 Veteran screenwriter-director Frank Darabont (The Shawshank Redemption), has adopted Robert Kirkman’s graphic novel and remained faithful to characters and themes, but has taken the story in directions beyond the source material.  As I write this, news has come across the wire that Darabont has fired the show’s writing staff, as he apparently wrote four of this season’s six eps anyway and rewrote the remaining two.  If that’s the case, it’ll be interesting to see how he oversees next fall’s second season, which will expand to thirteen episodes.  As long as it’s as well written, acted and directed as this first season has been, next October cannot come soon enough.